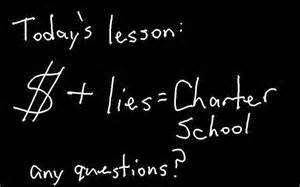 BY MARK NAISON
To understand why  we may be approaching a charter school crisis that resembles the one that developed around subprime mortgages, you need to understand how investment banks and credit rating agencies seized upon an instrument to make homeownership available to people with limited resources as a vehicle to make fortunes and advance careers, leaving the tax payers with a large bill. I think something similar is happening today with charter schools, once seen as an opportunity to provide better educational opportunities for families in low and moderate income neighborhoods. In each instance,  an institution initially aimed at expanding opportunity for those with limited resources became, because of government favoritism and lack of oversight, a vehicle for profit taking on a grand scale by the very privileged that sometimes left those the institution was designed to help in very bad shape
The subprime mortgage was a loan offered by banks and financial institutions to people whose credit rating and financial position was too weak to qualify for a normal 20 to 30 year mortgage at the prevailing interest rate.  To protect the lender, this was done by making the interest rate much higher, with the penalty, in the case of default, being repossession of the home that was purchased. This was obviously a high risk endeavor for the borrower. But because the nation was becoming more economically polarized, with working class incomes plunging and middle class incomes stagnant, the Clinton administration and federal lending agencies started pushing this instrument as a way of keeping the dream of homeownership alive in the nation, especially among working class people and people of color.  Banks, savings and loans, and mortgage companies rose to the challenge, writing millions of these mortgages to people whose incomes and collateral did not qualify them for a conventional mortgage.
At times, they aggressively marketed these mortgages, pushing them on people who never dreamed they could purchase a home, triggering a wave of new residential construction in many parts of the nation.  It seemed like a democratic moment in the nation’s history- millions of new home owners, many of them people of color, a boom in residential construction, work for lawyers and bankers specializing in residential loans.
But underlying this boom were shady practices that elected officials chose to ignore. Many of the mortgages were written in ways that hid the risks borrowers were taking with variable rates that rose sharply after the first few years.   There was no way  borrowers were going to be able to pay their mortgages with the rates they would have five or ten years after they were initially written and many  would lose the homes they had purchased.  Worse yet, investment banks began to bundle these mortgages into bond offerings, and sell them as a safe investments to insurance companies, pension funds, government institutions, and high end investors around the world, raking in huge commissions as they did so.  And here, corruption on a grand scale turned a risky lending practice into a destabilizing force of deadly proportions in the global economy.
Rating agencies, seeing huge profits being made by their best customers, the large investment banks, started giving triple A ratings to bonds based on the bundling of individual mortgages which, were they rated, would have been giving a rating of “F.” This practice ended up spreading the risk into every corner of the global economy, as investors rushed to gobble up the bonds, more mortgages were written and sold to meet the demand. And for a while it all seemed to work. Millions of people who never had homes how had them, while fortunes were being made in the writing, bundling and marketing of these mortgages.
But inevitably, the boom turned to bust.  When the high rates on the mortgages started kicking in, millions of people defaulted on their loans, not only losing their homes but setting in motion a chain reaction which destabilized not only the banks which had written the mortgages, but the financial institutions which had bundled them, along with their customers. Some of the largest banks and insurance companies in the nation failed and went under, and others had to be rescued through an injection of funds from the federal government at huge expense to tax payers.  And as the economy plunged into near Depression, the residential housing market was shattered, and along with it the dream of widespread home ownership among the poor. Today, there are 13 million abandoned homes and commercial properties in the US, while large numbers of families live doubled and tripled up in properties which were designed to be private homes
While the comparison is not exact, there are some powerful similarities between what happened to subprime mortgages and what is currently taking place with charter schools, another “short cut” to opportunity which has been seized upon by elites for financial and political gain, to the detriment of those for whom the charter school was initially designed to help.
Charter schools, which are public funded schools which have their own boards of directors and can set their own hiring policies, curricula, and patterns of student recruitment and discipline independent of the regulations governing public schools , were initially created to promote greater experimentation and innovation in public education.  Many early charter schools were created by teachers and parents and promoted innovative pedagogies. Some still do. 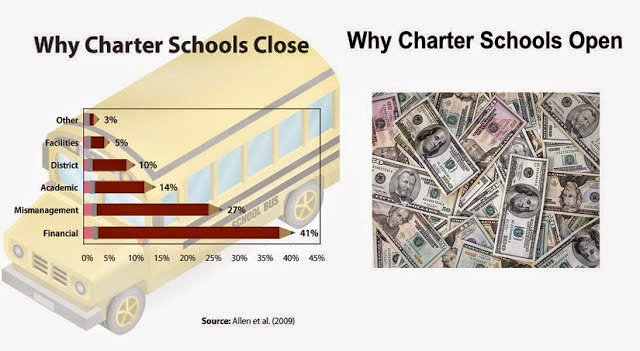 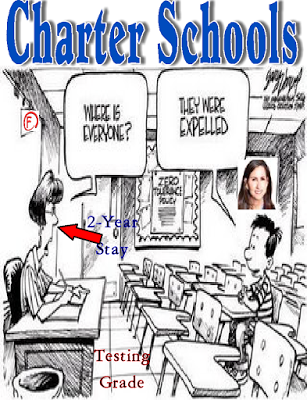 Not all charter schools practice these forms of discrimination. But enough do, with the number growing every day, that the issue cries out for investigation at the city, state and federal level.
The same is true of fiscal abuse and political favoritism, which, if anything, may even be more prevalent. These include
**Inflated salaries for Charter School CEO’s and founders of charter school chains. One charter school operator in Washington DC is under investigation for drawing more than 3 million dollars in compensation a year.
** Putting public officials, and relatives of public officials on the boards of charter schools seeking public funding. Instances of this have been uncovered in Indiana, Florida, California, and Tennessee and can probably be found in most other states.
**Outright embezzlement of funds by charter school operators, instances of which have been uncovered in New York, Illinois, Michigan, Ohio and Connecticut.
** Involvement of charter school operators in real estate fraud with the intention of inflating the value of properties in neighborhoods where new charter schools are being built.
** The creation of on line and for profit charter schools, without serious oversight, even though such entities have no track record of effective instruction.
** The granting of charter school franchises, in some states, to religious institutions which teach creationism and biblical literalism, and exclude students who do not share those beliefs.
What we have here, to put it bluntly, is a pattern of discrimination and fraud that hurts the very families
the charter schools were intended to help, allows ambitious individuals to enrich themselves at public
expense, and ultimately undermines the quality of public education in cities throughout the nation.
The entire charter industry, riddled with fraud, corruption and discrimination, is poised to slowly build
to a public education collapse if the trends of cherry picking the best students, dumping the high needs
kids into public schools then closing them for under performing continues.
It is time that all forms of Charter School Favoritism come to an end, that Charter Schools be subject to the same level of oversight that public schools are, that closing of public schools to make way for Charters stop immediately and that there be no further expansion of charter schools until their patterns of governance and operation fully investigated
Posted by Black Educator at 10:51 AM 5 comments: