What Comes After the NYCDOE Test Bubble Crash of 2010? 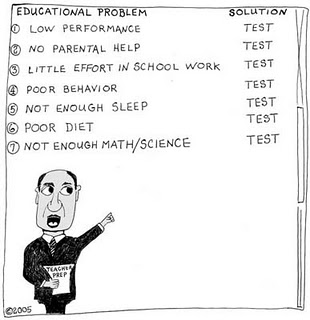 In light of the revision of scoring rubrics by the NYSED, The Coalition for Public Education makes the following observations on the uses and abuses of high stakes exams:
*High stakes exams reflect a student's preparation for an exam, prior successes in school, and their family's socio economic and educational level.
*Reliance on high stakes exams reproduce existing divisions and social control based on race and class.
*The results of high stakes exams were used by the current "education reformers" to narrowly define an educational crisis based on a "failure" of students, families and educators.
*High stakes exams provided a "race neutral" cover to replace the BOE, install a mayoral dictatorship and enrich private contractors.
*High stakes exams were used to create an illusion that the so called "achievement gap" in NYC schools was narrowing while race and class inequality widened in the larger society. Race and class segregation in the public schools has also increased. Mayoral dictatorship, has insulated increasingly white and gentrified districts, gifted and talented programs, specialized science high schools, and schools within schools. The hiring of Black and Latino educators has declined by 42% which DOE officials themselves attribute to the NYS teacher certification exam.
*The "data" derived from high stakes exams is not a useful guide in a human rights based system of education

Posted by Black Educator at 8:22 AM No comments: 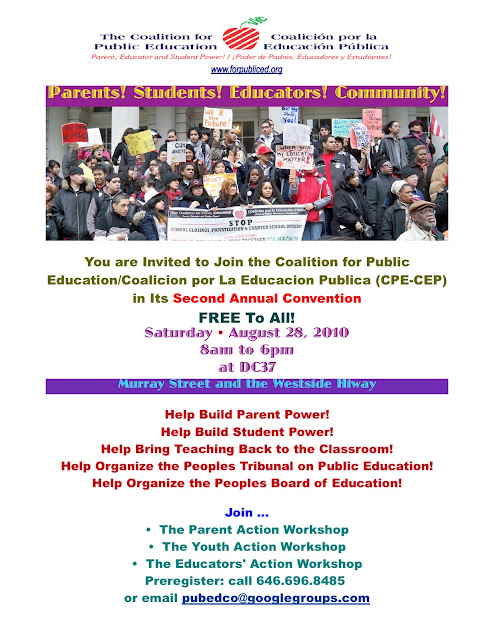 The meeting began with a Power Point report using Tweed fuzzy math to try to discount the awful publicity BloomKlein have been receiving over the results of the recent tests showed that the nationwide accolades tossed at the NYCDOE by ed deformers has been more than a little over done.

I like to call it the, "At least we're better than Rochester" defense.

DeScribe is not the world's first or most famous Hassidic rapper, but he is looking to obtain a higher level of recognition for his positive sound.

Shemspeed/Modular/City Limits
Hassidic Rapper DeScribe and Rohan Marley chat before a press conference premiering DeScribe's new song.
Crown Heights — DeScribe, the Hasidic Jewish hip hop artist who hails from Australia and resides in Crown Heights, sits in a corner of Brooklyn Borough Hall, his left arm draped around Rohan Marley, Bob Marley's son. In the minutes before his press conference begins, DeScribe (pronounced DEE-SCRIBE) leans back in his seat and recounts the story of how he summoned the courage to introduce himself to Marley when he saw Marley on the street sporting a huge mane of dreadlocks.
"So finally, I'm just like, I gotta find out who [this guy] is," DeScribe says. "So I tap him on the shoulder and say, 'Excuse me sir, are you in music?' and he looks at me and he's like, 'No, man, I'm not in music, but my family's in music.' So I said 'What's your name?' So he said 'Rohan Marley.'
And I was like, 'Back up a second. Marley, Marley?'"

A bushy beard on his face, DeScribe is dressed in a black suit and wears a hat and glasses. His birth name is Shneur HaSofer and he looks similar to the rabbis attending the event, many of whom have worked in Crown Heights and Brooklyn for several years trying to foster peace between the Jewish and Black communities there. During the 1991 Crown Heights race riots, DeScribe was still a boy, however. In fact, he was not even in the country.
DeScribe is not the world's first or most famous Hasidic rapper (that distinction probably belongs to White Plains's Matisyahu, who debuted in 2004) but DeScribe is looking to obtain a higher level of recognition for his positive sound. At Monday's Racial Harmony Press Conference, he premiered the music video for "Harmony," the title song he released in March on his album.
Several governmental and community leaders attended and spoke at the event, which was meant to commemorate the riots and celebrate the neighborhood's ensuing efforts to build racial harmony.
In the song, DeScribe asks "where's the love, where's respect, where's the unity?" He encourages people to become more aware and involved in social issues, saying, "A real small change is a lot/try to give it a shot… Come together, life is sacred/let this party pop." The music video depicts people of all races, most of them young, many of them holding signs bearing words such as "unity," "harmony," respect," and "love."
The Crown Heights riots erupted in August 1991, about 19 years ago, after a Hasidic rabbi lost control of his car and accidentally killed a child of two Guyanese immigrants. An ambulance service operated by a Jewish non-profit took the rabbi away from the scene, allegedly to ensure his safety, before the two children he hit were removed from under his car, an action that angered several community members and led to the ensuing violence.
Hasidic and black community leaders who spoke at the event said race relations in Crown Heights and Brooklyn have improved since then.
"Through the past 19 years, I've worked with many of my colleagues both within the Jewish community as well as the Black community to help bring about harmony, understanding, meaningful discussions, and sometimes even arguments, but always with one goal: to bring harmony to the people of Brooklyn," says Rabbi Shia Hecht, as he opens up the event. "And I must say that we have accomplished a lot. But like in every accomplishment, we don't look back on what we accomplished as much as we look forward to how much we still can accomplish."
Hecht said DeScribe's song and accompanying music video should resonate with the youth of Crown Heights and promote healthy relationships between the Jewish and Black communities there and in the city as a whole.
"When I saw this video today, it was reassuring that there are young people now amongst us that have taken the baton," says Richard Green, an African-American community leader who is the CEO of the Crown Heights Youth Collective, a program that encourages youth to refocus and take pride in their community. "It started years ago when we got young people together to do music. We felt that music would be the message and the musicians the messengers."
The immediate source of inspiration for "Harmony," according to both DeScribe and the director of the music video, Lenny Bass, came from Israel.
"It all began with an e-mail link to a very disturbing video," Bass said during the press conference. "The video was captured in Israel. It revealed a group of teens brimming with racist views of America's soon-to-be first African American president Barack Obama. The video, in all of its ignorance, was both painful and enraging to us all. So much so that a very long drawn out e-mail debate/argument followed."
DeScribe wrote the song after seeing the video and participating in the ensuing e-mail dialogue.
"It's to raise an awareness that we need to love, respect, unity and appreciation," says DeScribe.
"And we are different, so we're not necessarily gonna melt into each other, but what we can do is understand each other a little more and know that there's willingness on both sides to be one community."
===================


Posted by Black Educator at 6:05 AM No comments: