NOTE: This is why we need a structured curriculum and teacher training that centers on Black/Latino Culture and History. Demand that the new Chancellor implement this progressive education policy by the Fall of 2014!!
Added by daphne R on February 11, 2014.

The New York Daily News reports that fourth grade teachers at Public School 201 in Flushing Queens forbade their students to write about Malcolm X for Black History Month. The educators termed that Malcolm X was “violent” and “bad.”

The unofficial mandate came from fourth grade teachers at the Flushing, Queens’ elementary school. A parent complained to the principal at the school that her son was unable to write about the assassinated civil rights icon upon his teacher’s behest. The parent Cleatress Brown, informed the principal Rebecca Lozada of the details of the incident. Brown said that the teachers are imposing their own opinions on the students. Ms. Brown instructed her son to write about Malcolm X anyway and submit the report. She said, “That’s called learning.”

Another student from a different class was given the same aforementioned mandate. He was very upset that he couldn’t pen a report about Malcolm X.  Angel Minor, the student’s mom said that this was disrespectful to our history. This particular student is in a Technology Class and the teacher looked up some information on Malcolm and deemed he was too violent and not age appropriate. The educator has since apologized to the parents.

The children were given a list of individuals pertinent to black history they could write about for Black History Month and Malcolm X was on the list, but was quickly removed. Malcolm advocated for the use of violence for self defense.

Sylvia Cyrus, the executive director for the Association for the Study of African-American Life and History said there was more to the Civil Rights movement than Martin Luther King. She went on to say “Malcolm X is a figure in American history who helped make change.”

Parents met with the principal to discuss learning more about the activist who was legendary in New York City and slain at the Audubon Theatre in the Washington Heights section of New York City.
Posted by Black Educator at 6:40 AM 2 comments:


This took place at Newark's First Avenue School. The camera work is a little frantic, but you still can get the sense of righteous anger and determination for Newark's parents to control the educational destiny of their children. Newark's public schools are controlled by the state Dept of Education and not by Newark's parents because several years ago, its public school system was deemed a "failure" and the citizens of Newark were/are assumed to be too ignorant or corrupt or incompetent to run their own schools. 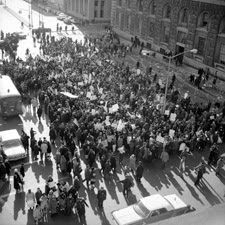 The Two Massive Walkouts that Set the Political and Mobilization Tone for the Historic Oceanhill-Brownsville/Two Bridges/IS 201 Struggles for Community Control.

In one of the largest demonstrations of the Civil Rights movement, hundreds of thousands of parents, students and civil rights advocates took part in a citywide boycott of the New York City public school system to demonstrate their support for the full integration of the city's public schools and an end to de facto segregation. 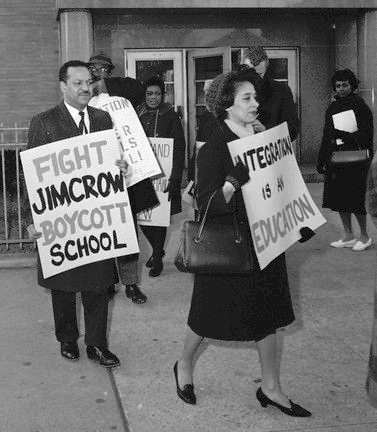 The idea for a boycott began in the early 1960s, when Milton Galamison, a Presbyterian minister and former president of the National Association for the Advancement of Colored People's (NAACP) Brooklyn branch, brought parents, teachers, and local civil rights activists together in a coalition called the Parents' Workshop for Equality in New York City Schools. The organization's sole objective was to render the racial imbalance of African American and Puerto Rican schools by persuading the New York City Board of Education to implement integration timetables. After years of unsuccessful lobbying, the Parents' Workshop for Equality decided to take direct action against the school board and called upon Bayard Rustin to organize a one-day protest and boycott of the city's public school system. 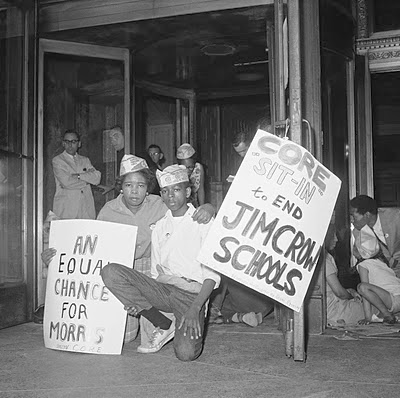 With the boycott set for February 3, 1964, Rustin worked with local Civil Rights organizations to plan the boycott, as well as local ministers who established freedom schools for participating students to attend. Response from the African American and Puerto Rican communities was overwhelming as more than 450,000 students refused to attend their respective schools on the day of the boycott. In addition, thousands of demonstrators staged peaceful rallies at the Board of Education, City Hall and the Manhattan office of Governor Nelson Rockefeller. Despite enjoying broad support, the boycott failed to force the city's school board to undertake immediate reform.

This video clip begins with an interracial group of demonstrators marching down a street holding picket signs. Slogans on the signs include, "Segregation can't teach democracy," "A good school for all children," "Jim Crow Donovan Must Go" and a Spanish phrase that may be translated to "Integration is a great education." The crowd chants "Jim Crow must go!" The clip goes silent for a few moments during the march and later as African American students bundled in warm clothes walk past a fence and into a building. Sound resumes, and women enter the same building. Later, a crowd stands in front of another building, many holding picket signs.

After the demonstration, a reporter interviews Malcolm X, who says he has come to see segregation exposed in the New York City school system, proving "you don't have to go to Mississippi to find a segregated school system." He goes on to explain that he supports the boycott because it shows that some of the problems for which the South has been condemned also exist in New York.

Next, the reporter interviews to Adam Clayton Powell, minister and member of the House of Representatives. Powell declares that the Urban League, the National Association for the Advancement of Colored People, and the Congress of Racial Equality have lost their influence on African Americans in New York. He claims that those organizations demonstrate their irrelevance by not coming supporting the school boycott and not coming to meetings about it.

He claims that young African Americans will not "let Ivory Tower, big-name Negro leaders control them anymore." Powell suggests that the next moves are more demonstrations "until we make democracy work as it should work."

Although discussions of school integration had been taking place in New York City since 1954, attempts by the school board to integrate white, African American, and Puerto Rican schools were stymied by large-scale racial housing patterns and by white parents moving their children to private schools or to suburbs. The school board, reluctant to enforce mandatory busing, was unsuccessful in attempts to integrate schools with voluntary transfer programs.
African American community leaders, led by Reverend Milton Galamison, worked with local chapters of the National Association for the Advancement of Colored People (NAACP) and the Congress of Racial Equality (CORE) to organize a school boycott for February 13, 1964. That day, nearly forty-five percent of students stayed away from school. When the school board did not immediately respond to the boycott, Galamison organized a second boycott for March 16 and began demanding total, immediate desegregation of the schools with widespread forced busing.

Leaders of the NAACP and CORE felt Galamison had not given the school board enough time to work out a solution and did not support the second boycott. In contrast, Malcolm X and Adam Clayton Powell, seen by some as more militant in their approach to civil rights, did support the boycott and Galamison's efforts to force the school board to act. Just over twenty-five percent of students stayed away from school during the second boycott on March 16, approximately half the amount of the first boycott.

We Can Learn a lot from this period of Struggle for quality racist-free education! How can we mobilize 450,000 students and their parents to boycott the Common Core and High Stakes Testing Madness?

How can we mobilize 450,000 students and their parents to demand that Black and Latino History and Culture be taught as a mandatory requirement for graduation?

How can we mobilize 450,000 students and their parents to demand that the teaching staff be reflective of the racial demographics of New York City?

Learn how we can revitalize a People's Movement for quality public education by joining the Coalition for Public Education (CPE) and attend our public meetings held on the first Thursday of every month at DC37 (Barclay & the Westside Hiway).

Posted by Black Educator at 9:58 AM 4 comments: