THE COLOR OF SCHOOL CLOSURES 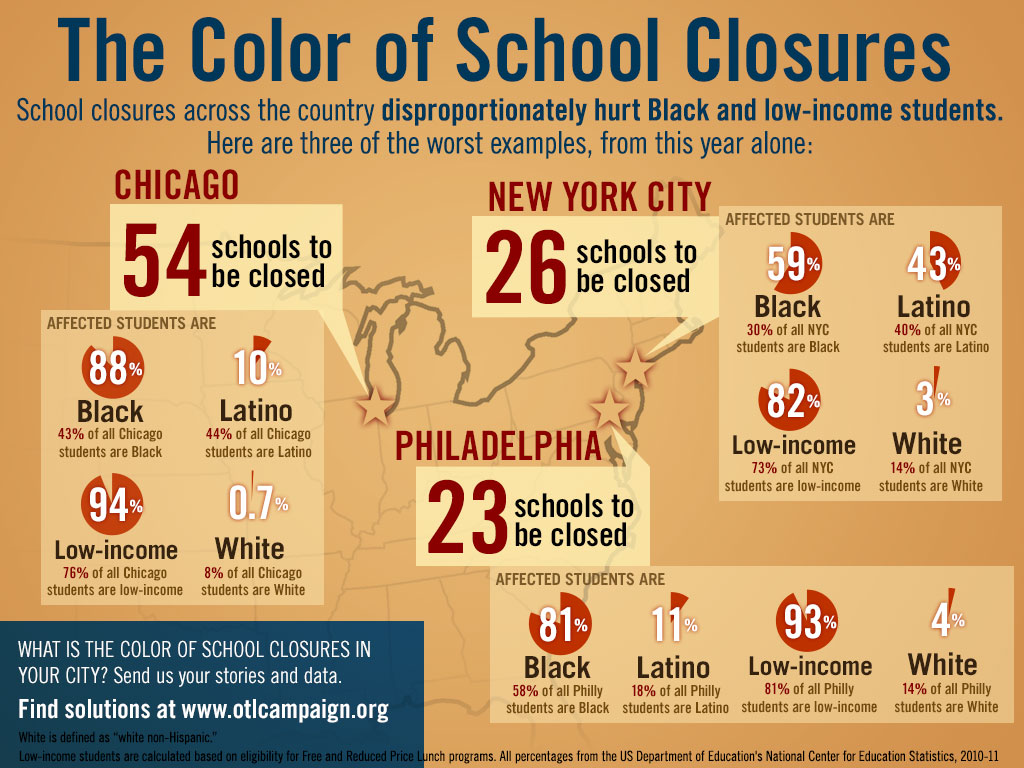 The Collapse of Public Education in the USA

Posted by Black Educator at 4:28 PM No comments:

Tennessee State Senator Stacey Campfield accuses protesters of using eight-year-old Aamira Fetuga as a “prop” … after using her as a prop in this photo. Photo from politix.topix.com.

Tennessee Senate Bill 132 — scorned by opponents as the “Starve the Children” bill — went down in flames today, after 60 outraged protesters led by a gutsy eight-year-old girl marched on the capitol and publicly shamed State Senator Campfield into dropping this controversial legislation. But first, things got reeeeeallly ugly in Nashville, as recorded in a shocking video uploaded to YouTube by Eric Patton.

The professionally produced video from the Tennessean, as shown in a previous AI article, is easy on the eyes, and tells a charming tale of a spirited little girl telling Truth to Power. Patton’s homespun effort, on the other hand, reveals the darker story of a lawmaker who pushes senselessly cruel and discriminatory legislation, who refuses to face the people he’s hurting, and who has no problem with brutally snubbing a little girl who’s scared that her family won’t have enough to eat or be able to keep the lights on. It definitely puts the “raw” in “raw footage,” and catches a lot of stuff the Tennessean‘s camera crew missed. Patton also helpfully added some captions to help viewers follow the proceedings.

The excruciating four minutes and twenty six seconds begins as people file out from a meeting in Lieutenant Governor Ron Ramsey’s office, trailed by Ramsey and Campfield. Off-screen, a woman chimes in a overly-cheery, lilting voice, “Look, someone wants to talk to you.” It’s not clear whether she’s addressing Campfield, or the little girl that roared. Campfield immediately gets his b*tch on, pats eight-year-old Aamira Fetuga on the head, and snarks, “Hey, thanks for coming to school today.” As the woman declares, “She’s got something to give to you,” Fetuga hands him a petition protesting SB 132.

Tennessee State Senator Stacey Campfield (left), Aamira Fetuga, age 8, and Protesters K. Chambers and R. Fetuga. The man in the background with the blue shirt and glasses may be Eric Patton, who filmed the video shown below. Screen captured image from the Tennessean‘s video footage.

Then, in an amazingly sleazy move that you’d have to see to believe, Campfield poses for the cameras while grinning and leaning in towards the eight-year-old, and then exclaims:


“Thank you! I LOVE it when people use children as props!”

The remaining video footage consists of the determined little girl and her band of protesters following Campfield and trying to get a word in edgewise, while the Senator marches imperviously through the dark, narrow, and claustrophobic corridors of power chanting in a creepily repetitive, sing-song voice, “I don’t use children as props.” The intrepid elementary schooler finally catches up with him on the escalator and declares, “I don’t like the way you take benefits from people.” Campfield then engages in a shouting match with the protesters and nearly knocks down a woman while desperately trying to escape the reporters, photographers, and film crew.

Other highlights include:
What is it about these Republicans?

As explained by my AI colleague, Stephen D. Foster, Jr., SB 132 would have tied welfare payments to grades, by cutting Temporary Assistance for Needy Families (TANF) by up to 30% when children don’t perform well in school. To be exempt from these cuts, the parents would need to jump through all sorts of hoops, including attending conferences, taking an eight-hour parenting class, and — if necessary — hiring a tutor or putting the child in summer school.


Posted by Black Educator at 6:18 AM No comments:

Newark Students Plan to WALK OUT on Tuesday  9 April 2013!


On Tuesday, April 9th, 2013 @ 12PM All Newark Public High School Students Will Walk out of their Classrooms to March to the Rutgers Law School (located at 123 Washington Street, Newark) for the State Assembly Budget Hearings on Education. Students, Families, Education Advocacy Groups, and Community will Join in Solidarity to Demand that the State Assembly "FOLLOW THE LAW, AND STOP THE CUTS'.